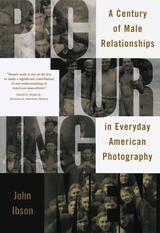 Picturing Men: A Century of Male Relationships in Everyday American Photography
by John Ibson
University of Chicago Press, 2006
Paper: 978-0-226-36858-0
There was a time in America when two men pictured with their arms wrapped around each other, or perhaps holding hands, weren’t necessarily seen as sexually involved—a time when such gestures could be seen simply as those of intimate friendship rather than homoeroticism.

Such is the time John Ibson evokes in Picturing Men, a striking visual record of changes in attitudes about relationships between gentlemen, soldiers, cowboys, students, lumberjacks, sailors, and practical jokers. Spanning from 1850 to 1950, the 142 everyday photographs that richly illustrate Picturing Men radiate playfulness, humor, and warmth. They portray a lost world for American men: a time when their relationships with each other were more intimate than they commonly are today, regardless of sexual orientation. Picturing Men starkly contrasts the calm affection displayed in earlier photographs with the absence of intimacy in photos from the mid-1950s on. In doing so, this lively, accessible book makes a significant contribution to American history and cultural studies, gender studies, and the history of photography.
AUTHOR BIOGRAPHY
John Ibson is professor of American Studies at California State University, Fullerton.
TABLE OF CONTENTS


Preface: A Note on Sources, Purposes, and Assumptions
Acknowledgments
1. Introduction: Whence Came the Void? Men's Uneasy Relationships in Contemporary America
2. The Lost Ritual: American Men Together in Studio Portraits
3. Pageants of Masculinity: Photography as Cultural Performance
4. Merry Bands of Brothers: Military Photographs through World War I
5. Straightening Up: The Evolution of the Team Portrait
6. Whatever Happened to Intimacy? American Men Together in Snapshots
7. Men Set Free: World War II and the Shifting Boundaries of Male Association
Epilogue: Out of the Attic—Vernacular Photography and Cultural Studies
Notes
Index