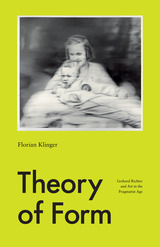 A pragmatist conception of artistic form, through a study of the painter Gerhard Richter.

In this study of the practice of contemporary painter Gerhard Richter, Florian Klinger proposes a fundamental change in the way we think about art today. In reaction to the exhaustion of the modernist-postmodernist paradigm’s negotiation of the “essence of art,” he takes Richter to pursue a pragmatist model that understands artistic form as action. Here form is no longer conceived according to what it says—as a vehicle of expression, representation, or realization of something other than itself—but strictly according to what it does.

Through its doing, Klinger argues, artistic form is not only more real but also more shared than non-artistic reality, and thus enables interaction under conditions where it would otherwise not be possible. It is a human practice aimed at testing and transforming the limits of shared reality, urgently needed in situations where such reality breaks down or turns precarious. Drawing on pragmatist thought, philosophical aesthetics, and art history, Klinger’s account of Richter’s practice offers a highly distinctive conceptual alternative for contemporary art in general.

AUTHOR BIOGRAPHY
Florian Klinger is associate professor of Germanic studies at the University of Chicago.

REVIEWS
“In this extraordinarily illuminating book, Klinger builds on a painstaking consideration of Richter’s artistic practice to derive a pragmatist theory of artistic form and of form’s ultimate purpose. In addition to its exciting philosophical and art historical interventions, Klinger’s analysis delineates a practical ethics of art-making that deserves to be read by anyone interested in the theory and practice of art in today’s crisis of world-sharing.”
— Whitney Davis, University of California at Berkeley

“Theory of Form is a twofold triumph: it presents the most original study of Richter’s aesthetics in recent years, and it is also a groundbreaking contribution to theorizing contemporary art. Remarkably linking form to reaction, judgment, and transformation, it is essential reading for anyone interested in art’s capacity to profoundly touch us and to partake in shaping our world.”
— Amir Eshel, author of Poetic Thinking Today

“Klinger’s Theory of Form combines astute philosophical thought with a fascinating close analysis of Richter’s practice, yielding a new understanding of historical time and contemporaneity. It raises the theory of form to another level – indeed, it makes one see how form in art ought to be thought today.”
— Rahel Villinger, author of Kant und die Imagination der Tiere (Kant and the Imagination of Animals)