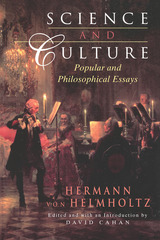 Hermann von Helmholtz was a leading figure of nineteenth-century European intellectual life, remarkable even among the many scientists of the period for the range and depth of his interests. A pioneer of physiology and physics, he was also deeply concerned with the implications of science for philosophy and culture.

From the 1850s to the 1890s, Helmholtz delivered more than two dozen popular lectures, seeking to educate the public and to enlighten the leaders of European society and governments about the potential benefits of science and technology to a developing modern society. David Cahan has selected fifteen of these lectures, which reflect the wide range of topics of crucial importance to Helmholtz and his audiences. Among the subjects discussed are the origins of the planetary system, the relation of natural science to science in general, the aims and progress of the physical sciences, the problems of perception, and academic freedom in German universities. This collection also includes Helmholtz's fascinating lectures on the relation of optics to painting and the physiological causes of harmony in music, which provide insight into the relations between science and aesthetics.

Science and Culture makes available again Helmholtz's eloquent arguments on the usefulness, benefits, and, intellectual pleasures of understanding the natural world. With Cahan's Introduction to set these essays in their broader context, this collection makes an important contribution to the philosophical and intellectual history of Europe at a time when science played an increasingly significant role in social, economic, and cultural life.
TABLE OF CONTENTS