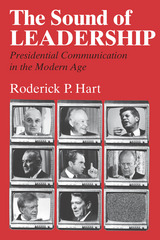 Why did Gerald Ford speak in public once every six hours during 1976? Why did no president spreak in Massachusetts during one ten-year period? Why did Jimmy Carter conduct public ceremonies four times more often than Harry Truman? Why are television viewers two-and-a-half times more likely to see a president speak on the nightly news than to hear him speak?

The Sound of Leadership answers these questions and many more. Based on analysis of nearly 10,000 presidential speeches delivered between 1945 and 1985, this book is the first comprehensive examination of the ways in which presidents Truman through Reagan have used the powers of communication to advance their political goals. This communication revolution has produced, Roderick P. Hart argues, a new form of governance, one in which public speech has come to be taken as political action. Using a rhetorical appraoch, Hart details the features of this new American presidency by carefully examining when and where presidents spoke in public during the last four decades and what they said. Even though presidents have been speaking more and more, Hart reveals, they have been saying less and less. Rather than leading the nation, the modern president usually offers only the hollow "sound" of leadership. Written with great flair and acuteness, The Sound of Leadership will become a standard guide to the voices of modern presidential politics.
AUTHOR BIOGRAPHY
Roderick P. Hart is the F. A. Liddell Professor of Communication at the University of Texas, Austin. He is the author of Public Communication, The Political Pulpit, and Verbal Style and the Presidency.
TABLE OF CONTENTS