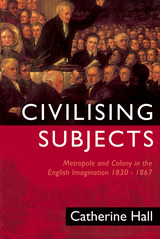 How did the English get to be English? In Civilising Subjects, Catherine Hall argues that the idea of empire was at the heart of mid-nineteenth-century British self-imagining, with peoples such as the "Aborigines" in Australia and the "negroes" in Jamaica serving as markers of difference separating "civilised" English from "savage" others.

Hall uses the stories of two groups of Englishmen and -women to explore British self-constructions both in the colonies and at home. In Jamaica, a group of Baptist missionaries hoped to make African-Jamaicans into people like themselves, only to be disappointed when the project proved neither simple nor congenial to the black men and women for whom they hoped to fashion new selves. And in Birmingham, abolitionist enthusiasm dominated the city in the 1830s, but by the 1860s, a harsher racial vocabulary reflected a new perception of the nonwhite subjects of empire as different kinds of men from the "manly citizens" of Birmingham.

This absorbing study of the "racing" of Englishness will be invaluable for imperial and cultural historians.
AUTHOR BIOGRAPHY
Catherine Hall is a professor of history at University College, London. She is the editor of Cultures of Empire: A Reader and coauthor of Family Fortunes: Men and Women of the English Middle Class 1780-1850 and Defining the Victorian Nation: Class, Race, Gender and the Reform Act of 1867.
TABLE OF CONTENTS


List of maps and illustrations
Acknowledgements
Abbreviations
Cast of Characters
Introduction
Prologue: The Making of an Imperial Man
Australia
New Zealand
St Vincent and Antigua
Jamaica
Part I - Colony and Metropole
Mapping Jamaica: The Pre-emancipation World in the Metropolitan Mind
1. The Missionary Dream 1820-1842
The Baptist Missionary Society and the missionary project
Missionaries and planters
The war of representation
The constitution of the new black subject
The free villages
2. Fault-lines in the Family of Man 1842-1845
Native agency and the Africa mission
The Baptist family
Brother Knibb
3. 'A Jamaica of the Mind' 1820-1854
Phillippo's Jamaica
'A place of gloomy darkness'
4. Missionary Men and Morant Bay 1859-1866
Anthony Trollope and Mr. Secretary Underhill
The trials of life
Morant Bay and after
Part II - Metropolis, Colony and Empire
Mapping the Midland Metropolis
5. The 'Friends of the Negro': Baptists and Abolitionists 1825-1842
The Baptists in Birmingham and the missionary public
Knowing 'the heathen'
Birmingham's 'Friends of the Negro'
The utopian years
6. The Limits of Friendship: Abolitionism in Decline 1842-1859
'A population intellectually at zero'
Carlyle's occasion
George Dawson and the politics of race and nationalism
Troubles for the missionary public
7. Town, Nation and Empire 1859-1867
New times
Morant Bay
Birmingham men
Epilogue
Notes
Bibliography
Index