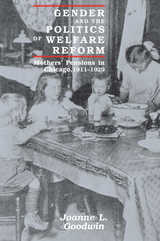 The first study to explore the origins of welfare in the context of local politics, this book examines the first public welfare policy created specifically for mother-only families. Chicago initiated the largest mothers' pension program in the United States in 1911. Evolving alongside movements for industrial justice and women's suffrage, the mothers' pension movement hoped to provide "justice for mothers" and protection from life's insecurities. However, local politics and public finance derailed the policy, and most women were required to earn. Widows were more likely to receive pensions than deserted women and unwed mothers. And African-American mothers were routinely excluded because they were proven breadwinners yet did not compete with white men for jobs. Ultimately, the once-uniform commitment to protect motherhood faltered on the criteria of individual support, and wage-earning became a major component of the policy.

This revealing study shows how assumptions about women's roles have historically shaped public policy and sheds new light on the ongoing controversy of welfare reform.
TABLE OF CONTENTS


List of Tables
Foreword by Catharine R. Stimpson
Acknowledgments
Introduction
1: Defining the Problems of "Dependent Motherhood"
2: The Structure of Public Provision: Gender and Race in Chicago's Welfare System
3: Gender and Social Policy: The Origins of Mothers' Pension Policy in Illinois
4: The Politics of Welfare Reform
5: The Economies of Mothers' Pensions
Conclusion
Appendix: Legislative and Judicial Changes in the Illinois 'Aid to Mothers' Law
Notes
Bibliography
Index