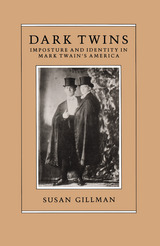 "Many persons have such a horror of being taken in," wrote P. T. Barnum, "that they believe themselves to be a sham and are continually humbugging themselves." Mark Twain enjoyed trading on that horror, as the many confidence men, assumed identities, and disguised characters in his fiction attest. In Dark Twins, Susan Gillman challenges the widely held assumption that Twain's concern with identity is purely biographical and argues that what has been regarded as a problem of individual psychology must be located instead within American society around the turn of the century. Drawing on Twain's whole writing career, but focusing on the controversial late period of social "pessimism" and literary "incoherence," Gillman situates Twain and his work in historical context, demonstrating the complex interplay between his most intimate personal and authorial identity and the public attitudes toward race, gender, and science.

Gillman shows that laws regulating race classification, paternity, and rape cases underwrite Twain's critical exploration of racial and sexual difference in the writings of the 1890s and after, most strikingly in the little-known manuscripts that Gillman calls the "tales of transvestism." The "pseudoscience" of spiritualism and the "science" of psychology provide the cultural vocabularies essential to Twain's fantasy and science fiction writings of his last two decades. Twain stands forth finally as a representative man, not only a child of his culture, but also as one implicated in a continuing American anxiety about freedom, race, and identity.
TABLE OF CONTENTS