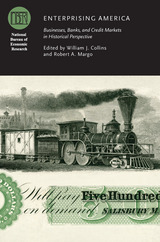 The rise of America from a colonial outpost to one of the world’s most sophisticated and productive economies was facilitated by the establishment of a variety of economic enterprises pursued within the framework of laws and institutions that set the rules for their organization and operation.

To better understand the historical processes central to American economic development, Enterprising America brings together contributors who address the economic behavior of American firms and financial institutions—and the associated legal institutions that shaped their behavior—throughout the nineteenth and early twentieth centuries. Collectively, the contributions provide an account of the ways in which businesses, banks, and credit markets promoted America’s extraordinary economic growth. Among the topics that emerge are the rise of incorporation and its connection to factory production in manufacturing, the organization and operation of large cotton plantations in comparison with factories, the regulation and governance of banks, the transportation revolution’s influence on bank stability and survival, and the emergence of long-distance credit in the context of an economy that was growing rapidly and becoming increasingly integrated across space.
AUTHOR BIOGRAPHY
William J. Collins is the Terence E. Adderley Jr. Professor of Economics at Vanderbilt University and a research associate of the NBER. Robert A. Margo is professor of economics at Boston University and a research associate of the NBER.
TABLE OF CONTENTS

I. Business Organization and Internal Governance

3. The Evolution of Bank Boards of Directors in New York, 1840?1950
Howard Bodenhorn and Eugene N. White

5. Sources of Credit and the Extent of the Credit Market: A View from Bankruptcy Records in Mississippi, 1929–1936
Mary Eschelbach Hansen

6. Economies of Scale in Nineteenth-Century American Manufacturing Revisited: A Resolution of the Entrepreneurial Labor Input Problem
Robert A. Margo