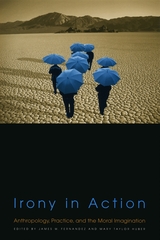 Irony today extends beyond its classification as a figure of speech and is increasingly recognized as one of the major modes of human experience. This idea of irony as an integral force in social life is at the center of this provocative book. The result of a meeting where anthropologists were invited to explore the politics of irony and the moral responsibilities that accompany its recognition, this book is one of the first to lend an anthropological perspective to this contemporary phenomenon.

The first group of essays explores the limits to irony's liberating qualities from the constrained use of irony in congressional hearings to its reactive presence amid widening disparities of wealth despite decades of world development. The second section presents irony's more positive dimensions through an array of examples such as the use of irony by Chinese writers and Irish humorists. Framed by the editors' theoretical introduction to the issues posed by irony and responses to the essays by two literary scholars, Irony in Action is a timely contribution in the contemporary reinvention of anthropology.
AUTHOR BIOGRAPHY
James W. Fernandez is a professor of anthropology at the University of Chicago. He is the author and editor of numerous works including Persuasions and Performances: The Play of Tropes in Culture and Beyond Metaphor: The Theory of Tropes in Anthropology.

Mary Taylor Huber is a senior scholar at the Carnegie Foundation for the Advancement of Teaching. She is the author of The Bishop's Progress: A Historical Ethnography of the Catholic Missionary Experience on the Sepik Frontier and co-editor of Gendered Missions: Women and Men in Missionary Discourse and Practice.
TABLE OF CONTENTS

Introduction: The Anthropology of Irony

Part One
Chapter 1The Constrained Use of Irony in U.S. Congressional
Hearings on Immigration

Chapter 2Irony and Power: Toward a Politics of Mockery
in Greece

Chapter 4What Makes the Anthropologist Laugh?:
The Abelam, Irony, and Me

Part Two
Chapter 7Wine in the Writing, Truth in the Rhetoric:
Three Levels of Irony in a Chinese Essay Genre