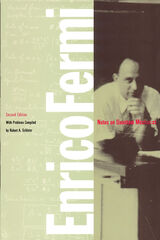 Notes on Quantum Mechanics
by Enrico Fermi
University of Chicago Press, 1995
Paper: 978-0-226-24381-8
The lecture notes presented here in facsimile were prepared by Enrico Fermi for students taking his course at the University of Chicago in 1954. They are vivid examples of his unique ability to lecture simply and clearly on the most essential aspects of quantum mechanics.

At the close of each lecture, Fermi created a single problem for his students. These challenging exercises were not included in Fermi's notes but were preserved in the notes of his students. This second edition includes a set of these assigned problems as compiled by one of his former students, Robert A. Schluter.

Enrico Fermi was awarded the Nobel Prize for Physics in 1938.
TABLE OF CONTENTS