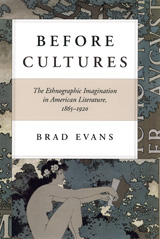 The term culture in its anthropological sense did not enter the American lexicon with force until after 1910—more than a century after Herder began to use it in Germany and another thirty years after E. B. Tylor and Franz Boas made it the object of anthropological attention. Before Cultures explores this delay in the development of the culture concept and its relation to the description of difference in late nineteenth-century America.

In this work, Brad Evans weaves together the histories of American literature and anthropology. His study brings alive not only the regionalist and ethnographic fiction of the time but also revives a range of neglected materials, including the Zuni sketchbooks of anthropologist Frank Hamilton Cushing; popular magazines such as Century Illustrated Monthly, which published Cushing's articles alongside Henry James's; the debate between Joel Chandler Harris, author/collector of the Uncle Remus folktales, and John Wesley Powell, perhaps the most important American anthropologist of the time; and Du Bois's polemics against the culture concept as it was being developed in the early twentieth century.
Written with clarity and grace, Before Cultures will be of value to students of American literature, history, and anthropology alike.
AUTHOR BIOGRAPHY
Brad Evans is assistant professor of English at Rutgers University.
TABLE OF CONTENTS