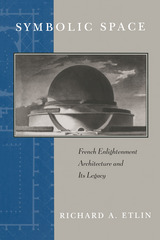 Richard A. Etlin explores the social and cultural hierarchies established in eighteenth-century France to illustrate how the conceptual basis of the modern house and the physical layout of the modern city emerged from debates among theoretically innovative French architects of the eighteenth-century. Examining a broad range of topics from architecture and urbanism to gardening and funerary monuments, he shows how the work of these architects was informed by considerations of symbolic space.

For Etlin, the eighteenth-century city was a place in which actual physical space was subjected to a complex mental layering of conceptual spaces. He focuses on the design theory of Boullée and Durand and charts their legacy through the architecture of Paul Philippe Cret, Frank Lloyd Wright, and Louis Kahn. He defines the distinctive features of neoclassicism and outlines the new grammar for classical architecture articulated by theorists and architects such as Laugier, Leroy, and Ledoux.

After discussing the eighteenth-century hôtel, revolutionary space, and the transformation of the image of the cemetery, Etlin examines the space of absence as embodied in commemorative architecture from Boullée and Gilly to Cret, Wright, and Terragni. His book provides an accessible introduction to a century of architecture that transformed the classical forms of the Renaissance and Baroque periods into building types still familiar today.
TABLE OF CONTENTS


Illustrations
Illustration Credits
Preface
Acknowledgments
1: Paris: The Image of the City
2: Revolutionary Space
3: Character and Design Method
4: The Neoclassical Interlude
5: The System of the Home
6: Landscapes of Eternity
7: The Space of Absence
Notes
Index