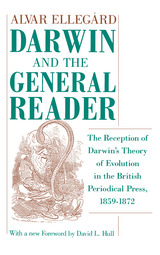 Darwin and the General Reader: The Reception of Darwin's Theory of Evolution in the British Periodical Press, 1859-1872
by Alvar Ellegård
University of Chicago Press, 1990
Paper: 978-0-226-20487-1
Drawing on his investigation of over one hundred mid-Victorian British newspapers and periodicals, Alvar Ellegård describes and analyzes the impact of Darwin's theory of evolution during the first dozen years after the publication of the Origin of Species. Although Darwin's book caused an immediate stir in literary and scientific periodicals, the popular press largely ignored it. Only after the work's implications for theology and the nature of man became evident did general publications feel compelled to react; each social group responded according to his own political and religious prejudices. Ellegård charts the impact of this revolution in science, maintaining that although the idea of evolution was generally accepted, Darwin's primary contribution, the theory of natural selection, was either ignored or rejected among the public.
TABLE OF CONTENTS


Foreword
Preface
1. The Background
2. The Climate of Opinion
3. The Press on the Progress of Darwinism
4. Darwinism at the British Association
5. Science and Religion: A Mid-Victorian Conflict
6. The Argument of Design
7. Miracles
8. The Bible
9. Mid-Victorian Philosophy of Science
10. The Immutable Essence of Species
11. Missing Links
12. The Battle against Natural Selection
13. The Case for Darwin
14. The Descent of Man
15. Summary and Conclusion
Appendix I. Statistical Analysis of the Press Reaction
Appendix II. List of Periodicals with Index of Quotations
Index of Names, with Biographical Notes
Bibliography of Citations