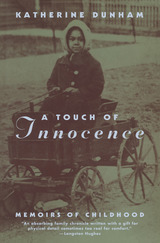 A Touch of Innocence: A Memoir of Childhood
by Katherine Dunham
University of Chicago Press, 1994
Paper: 978-0-226-17112-8
An internationally known dancer, choreographer, and gifted anthropologist, Katherine Dunham was born to a black American tailor and a well-to-do French Canadian woman twenty years his senior. This book is Dunham's story of the chaos and conflict that entered her childhood after her mother's early death.

In stark prose, she tells of growing up in both black and white households and of the divisions of race and class in Chicago that become the harsh realities of her young life. A riveting narrative of one girl's struggle to transcend the painful confusions of a family and culture in turmoil, Dunham's story is full of the clarity, candor, and intelligence that lifted her above her troubled beginnings.

"A Touch of Innocence is an absorbing family chronicle written with a gift for physical detail sometimes too real for comfort. In quietly graphic prose the growing girl, the slightly older brother, the ambitious father and the kind stepmother are pictured in such human terms that when their lives get tied into harder and harder knots beyond their undoing, one can only continue to read helplessly as doom closes in upon the household."—Langston Hughes, New York Herald Tribune

"A Touch of Innocence is one of the most extraordinary life stories I have ever read . . . . The content of this book is so heartbreaking that only the strongest artistic skills can keep it from leaking out into sobbing self-pity, but Katherine Dunham's art contains it, understands it and refuses to be overwhelmed by its terrors."—Elizabeth Janeway, New York Times

"The first eighteen years of the famous dancer and choreographer's life are brought vividly to the reader in this first volume of her autobiography. She writes of what it is like to be a special, gifted young woman growing up in a racially mixed family in the American Middle West. A beautiful, touching and sometimes discomforting book."—Publishers Weekly

"As writing it is honest, searing, graphic and touching, giving us a rather heartbreaking early view of the young American Negro who was later to make a name for herself as a dancer and choreographer."—Arthur Todd, Saturday Review
TABLE OF CONTENTS