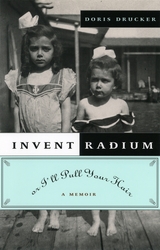 Invent Radium or I'll Pull Your Hair: A Memoir
by Doris Drucker
University of Chicago Press, 2004
Cloth: 978-0-226-16503-5
"And don't forget, once you are married to a Rothschild you can become a famous woman," Doris Schmitz's mother told her. "Be another Madame Curie and invent radium! You'll be famous!" Doris reminded her that radium had already been discovered. "Don't argue," her mother said. "You're going to invent radium or I'll pull your hair. You're just being negative, like your father."

Rothschilds and radium were the horizons of Doris's childhood. Born in Germany in the early twentieth century, she came of age in an upper-middle-class family that struggled to maintain its bourgeois respectability between the two World Wars. Doris Drucker (she met her husband Peter—of management fame—in the 1930s) has penned a lively and charming memoir that brings to life the Germany of her childhood. Rather than focusing on the rise of Hitler, Drucker weaves history into her story of the day-to-day life of a relatively apolitical family. She chronicles here the crowds that gathered to see the Zeppelin, her attempts to negotiate her Prussian mother's plans for her (like marrying well and becoming a famous scientist), ski trips and hikes, the schools she attended, her father's struggles to support the family, and all the stuff and drama that make up a childhood. Drucker's energetic storytelling, eye for the telling detail, and sly humor draw the reader into her portrait of a way of life made forever poignant by its place in history so close to the brutalities of World War II.

From the boarding school that forbade girls to look at their own legs while they bathed to the unfortunate confusion that resulted from Doris's misinterpretation of "Warsaw has fallen" as "The Waschfrau [washerwoman] has fallen," the tales recounted in Invent Radium or I'll Pull Your Hair give dimension and depth to a milieu that has been flattened by the historical events around it.
AUTHOR BIOGRAPHY
Doris Drucker was born in Cologne, Germany, and studied law and economics at the London School of Economics, Kiel University, and Frankfurt University. After her arrival in the United States, she received an M.S. in physics from Farleigh Dickinson University and conducted scientific market research as an independent contractor for several decades. In 1996, she founded RSQ, a company to manufacture and market a voice volume monitor invented by herself and a partner. A board member of several nonprofit organizations, she now lives in California.
TABLE OF CONTENTS


The Black Hat
World War I
The Servants
The Original Information Technology
The Ancestors
The Children
My Mothers Marriage
The German Defeat
The French Arrive
Koenigstein
The Social Order
A Wider Horizon
The Inflation Years
Back to School
My Father
Books
Back to St. Moritz
The Sisters
The Floberts
The Schiller School
Travel
Ski Trips
My Intellectual Journey
The Facts of Life
Frankfurt
Tunbridge Wells
The Settlement House
A Former Thief
Climbing the Social Ladder
A Marriage Proposal
The Warburg Institute
In France
La Bohême
Back to the Law
Meeting Peter Again
A Dinner Party
Postscript