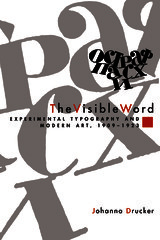 Early in this century, Futurist and Dada artists developed brilliantly innovative uses of typography that blurred the boundaries between visual art and literature. In The Visible Word, Johanna Drucker shows how later art criticism has distorted our understanding of such works. She argues that Futurist, Dadaist, and Cubist artists emphasized materiality as the heart of their experimental approach to both visual and poetic forms of representation; by mid-century, however, the tenets of New Criticism and High Modernism had polarized the visual and the literary.

Drucker suggests a methodology closer to the actual practices of the early avant-garde artists, based on a rereading of their critical and theoretical writings. After reviewing theories of signification, the production of meaning, and materiality, she analyzes the work of four poets active in the typographic experimentation of the 1910s and 1920s: Ilia Zdanevich, Filippo Marinetti, Guillaume Apollinaire, and Tristan Tzara.

Few studies of avant-garde art and literature in the early twentieth century have acknowledged the degree to which typographic activity furthered debates about the very nature and function of the avant-garde. The Visible Word enriches our understanding of the processes of change in artistic production and reception in the twentieth century.
TABLE OF CONTENTS