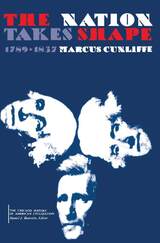 Marcus Cunliffe, whom the Washington Post and Times Herald calls "a master historian capable of seeing his subject whole," has written a cogent and revealing study of America's first half-century under the federal Constitution. Bounded by the first Washington Administration and the last Jackson Administration, this is the period in which democracy grew and shaped the nation. It witnessed the launching of the federal government; the expansion of the frontier; the establishment of a party system; the enunciation of a foreign policy; the manufacture of the symbols of nationalism; and the forging of the arguments of sectionalism. Most important, Mr. Cunliffe writes, "the American character seems to have been formed in essence within a generation of George Washington's accession to the Presidency."

"What [Mr. Cunliffe] has done is to weave together and show the fertile interplay of the American dream and the American reality—and show how much the dream modified the reality. . . . an acute and elegant performance."—Times Literary Supplement
AUTHOR BIOGRAPHY
Marcus Cunliffe is University Professor at George Washington University, Washington, D.C., and is the author of George Washington: Man and Monument (1958).
TABLE OF CONTENTS