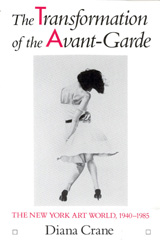 With the rise of Abstract Expressionism, New York City became the acknowledged center of the avant-garde. Diana Crane documents the transformation of the New York art world between 1940 and 1985, both in the artistic styles that emerged during this period and the expansion of the number and types of institutions that purchased and displayed various works.

Crane's account is built around discussions of seven styles: Abstract Expressionism in the forties; Pop art and Minimalism in the sixties; Figurative painting, Photorealism, and Pattern painting in the early seventies; and Neo-Expressionism in the early eighties. Demonstrating that the New York art world moved toward increasing acceptance of dominant American cultural trends, Crane offers a fascinating look not only at the intricacies of New York's artistic inner circle but also at the sociology of work and professions, the economics of culture markets such as "dealing art," and the sociology of culture.
AUTHOR BIOGRAPHY
Diana Crane is professor of sociology at the University of Pennsylvania. She is the author of Invisible Colleges: Diffusion of Knowledge in Scientific Communities, also published by the University of Chicago Press, and of The Sanctity of Social Life: Physicians' Treatment of Critically Ill Patients.
TABLE OF CONTENTS


List of Illustrations
Acknowledgments
1. Introduction
2. Style as a Social Phenomenon
3. The Dual Role of the Avant-Garde: The Aesthetic Tradition and the Crisis of Meaning
4. Popular Culture as Art: Pop Art as a Transitional Style
5. Art and Meaning: Themes in Representational Painting
6. Selling Myths: Art Galleries and the Art Market
7. Art Museums and the Reception of Avant-Garde Styles
8. Epilogue: The Evolution of the Avant-Garde
Appendix A: Unobtrusive Methods for Researching an Art Form
Appendix B: Supplemental Tables
Appendix C: Lists of Artists by Style
Notes
Bibliography
Index