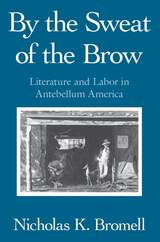 The spread of industrialism, the emergence of professionalism, and the challenge to slavery fueled an anxious debate about the meaning and value of work in antebellum America.


Acknowledgments
Introduction: "Ain't That Work?"
Pt. 1: The Works of Mind and Body
1: Manual Labor and the Problem of Literary Representation
2: The Meaning and Demeaning of Manual Labor at the Exhibitions of the Massachusetts Charitable Mechanic Association
Pt. 2: Eros and Labor
3: The Erotics of Labor in Melville's Redburn
4: Naturalized Labor and Natural History in Thoreau's A Week on the Concord and Merrimack Rivers
Pt. 3: Labor's Gendered Body
5: Women Carved of Oak and Korl: The Female Body as the Site of Gendered Labor in Hawthorne and Davis
6: The Labored Discourse of Domesticity
7: Maternal Labor in the Work of "Literary Domestics": Catharine Maria Sedgwick and Susan Warner
8: Literary Composition as Maternal Labor in Uncle Tom's Cabin
Pt. 4: Writing the Work of Slaves
9: The Meanings of Work and Song in Antebellum Slavery
10: Slavery, Work, and Song in Frederick Douglass's Autobiographies
Pt. 5: Toward an Ontology of Labor
11: "By the Labor of My Hands Only": The Making and Unmaking of Walden
Afterword
Notes
Index