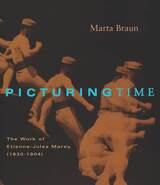 Etienne-Jules Marey was an inventor whose methods of recording movement revolutionized our way of visualizing time and motion. Best remembered for his chronophotography, Marey constructed a single-camera system that led the way to cinematography. Picturing Time, the first complete survey of Marey's work, investigates the far reaching effects of Marey's inventions on stream-of-consciousness literature, psychoanalysis, Bergsonian philosophy, and the art of cubists and futurists.

Braun offers a fascinating look at how Marey's chronophotography was used to express the profound transformation in understanding and experiencing time that occurred in the late nineteenth century. Featuring 335 illustrations, Picturing Time includes many unpublished examples of Marey's chronophotographs and cinematic work. It also contains a complete bibliography of his writings and the first catalog of his films, photographic prints, and recently discovered negatives.
TABLE OF CONTENTS