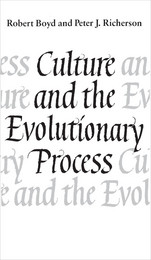 How do biological, psychological, sociological, and cultural factors combine to change societies over the long run? Boyd and Richerson explore how genetic and cultural factors interact, under the influence of evolutionary forces, to produce the diversity we see in human cultures. Using methods developed by population biologists, they propose a theory of cultural evolution that is an original and fair-minded alternative to the sociobiology debate.
TABLE OF CONTENTS