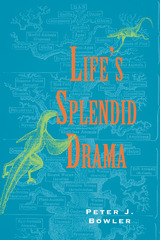 The story of life's splendid drama has captivated generations of the general public, just as it has intrigued biologists, especially those who began to try to solve evolutionary puzzles in the years immediately after the publication of Darwin's Origin of Species in 1859. Yet histories of the Darwinian revolution have paid far more attention to theoretical debates and have largely ignored the researchers who struggled to comprehend the deeper evolutionary significance of fossil bones and the structures of living animals. Peter J. Bowler recovers some of this lost history in Life's Splendid Drama, the definitive account of evolutionary morphology and its relationships with paleontology and bio-geography.

"[A] volume of impressive scholarship and extensive references."—Library Journal

"One of Bowler's best."—Kevin Padian, Nature

"[Bowler's] comprehensive review of the various debates and ideas in taxonomy, morphology, and vertebrate evolution . . . deserves the attention of biologists and other scholars interested in the history of ideas."—Choice

"The persistence of pre-Darwinian modes of thought in contemporary biology underlines the importance of Bowler's book. Its value is not only in the history it provides, but also in the way it illumines the present."—Peter J. Causton, Boston Book Review
TABLE OF CONTENTS


List of Figures
Preface
Table of Geological Periods and Eras
1: The First Evolutionary Biology
A New Biology
A Revolution in Science?
Transforming Traditions
The Professional Framework
2: The Tree of Life
Relationships Redefined
Form and Function
Convergence and Parallelism
Ontogeny and Phylogeny
The Base of the Tree
3: Are the Arthropoda a Natural Group?
The Problem of Arthropod Origins
The Genealogy of the Crustacea
Peripatus and the Origin of the Tracheata
Limulus an Arachnid
The Debate Widens
The Fossil Record
4: Vertebrate Origins
The Ascidian Theory
The Annelid Theory
The Arthropod Theories
Nemertines and the Actinozoa
Balanoglossus and the Echinoderms
The Environmental Trigger
Later Developments
5: From Fish to Amphibian
The Origin of Fish
The Fin Problem
The Origin of the Amphibians
From Water to Land
6: The Origin of Birds and Mammals
From Reptile to Bird
Taking to the Air
Monotremes, Marsupials, and Mammals
The Mammal-like Reptiles
7: Patterns in the Past
Putting Things Together
Adaptive Radiation
Laws and Trends
Rise and Fall
Mass Extinctions
8: The Geography of Life
Zoological Provinces
Lost Worlds
Northern Origins
Southern Continents
9: The Metaphors of Evolutions
Trees and Ladders
The Biology of Imperialism?
Phylogeny and Modern Darwinism
Biographical Appendix
Bibliography
Index