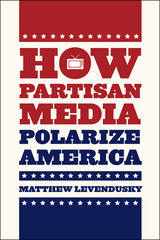 Forty years ago, viewers who wanted to watch the news could only choose from among the major broadcast networks, all of which presented the same news without any particular point of view. Today we have a much broader array of choices, including cable channels offering a partisan take. With partisan programs gaining in popularity, some argue that they are polarizing American politics, while others counter that only a tiny portion of the population watches such programs and that their viewers tend to already hold similar beliefs.
In How Partisan Media Polarize America, Matthew Levendusky confirms—but also qualifies—both of these claims. Drawing on experiments and survey data, he shows that Americans who watch partisan programming do become more certain of their beliefs and less willing to weigh the merits of opposing views or to compromise. And while only a small segment of the American population watches partisan media programs, those who do tend to be more politically engaged, and their effects on national politics are therefore far-reaching.
In a time when politics seem doomed to partisan discord, How Partisan Media Polarize America offers a much-needed clarification of the role partisan media might play.

AUTHOR BIOGRAPHY
Matthew Levendusky is assistant professor of political science at the University of Pennsylvania and the author of The Partisan Sort: How Liberals Became Democrats and Conservatives Became Republicans, also published by the University of Chicago Press. He lives in Philadelphia.
REVIEWS
“With How Partisan Media Polarize America, Matthew Levendusky argues persuasively that partisan media matter to political attitudes and behavior—and that their influence extends far beyond the relatively few people who actually watch such programs. This is an important contribution to a topic that is critical to understanding the present and future of political communication in America, and Levendusky brings together rigorous research with lively prose and compelling anecdotes.”
— Matthew Baum, Harvard University

“A first-rate work of social science. The advent and expansion of the partisan press in America is well-known, but the question of what effect the rise of partisan media has had on political attitudes has been less well-understood. What Matthew Levendusky does here is elaborate substantially and persuasively on this question with highly original experiments informed by the latest research.”
— Robert Y. Shapiro, Columbia University

“Essential. . . . This is an important book on an important topic—the role cable television has played in helping create the hyper-partisan United States.”
— Choice

“Researchers of American public opinion should consider [How Partisan Media Polarize America] one of the most important books of the year. . . . Levendusky makes approachable complex theoretical and empirical material [on] a topic of wide interest. . . . I see the book as a great instructional example of quantitative research done right. It gives readers both refreshing scholarly perspectives and fascinating talking points for intellectual cocktail parties.”
— Public Opinion Quarterly

“Innovative work. . . . Taken together, [Matthew Levendusky's How Partisan Media Polarize America and Kevin Arceneaux and Martin Johnson's Changing Minds or Changing Channels?] give us a real advance in our understanding of the potentially polarizing effects of partisan cable news.”
— Political Communication

“Levendusky argues that the combination of partisan political news and the modern twenty-four-hour news cycle has fundamentally changed the relationship between media, governance, and society. . . . This book is of interest to political scientists and scholars of both media and culture. Its focus on presenting the results of a multimethod research project makes it a useful resource.”
— Journal of American Culture