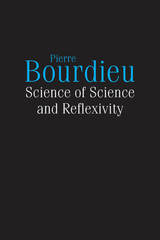 Over the last four decades, the French sociologist Pierre Bourdieu produced one of the most imaginative and subtle bodies of social theory of the postwar era. When he died two years ago, he was considered to be a thinker on a par with Foucault, Barthes, and Lacan—a public intellectual as influential to his generation as Sartre was to his.

Science of Science and Reflexivity will be welcomed as a companion volume to Bourdieu's now seminal An Invitation to Reflexive Sociology. In this posthumous work, Bourdieu declares that science is in danger of becoming a handmaiden to biotechnology, medicine, genetic engineering, and military research—that it risks falling under the control of industrial corporations that seek to exploit it for monopolies and profit.

Science thus endangered can become detrimental to mankind. The line between pure and applied science, therefore, must be subjected to intense theoretical scrutiny. Bourdieu's goals in Science of Science and Reflexivity are to identify the social conditions in which science develops in order to reclaim its objectivity and to rescue it from relativism and the forces that might exploit it. In the grand tradition of scientific reflections on science, Bourdieu provides a sociological analysis of the discipline as something capable of producing transhistorical truths; he presents an incisive critique of the main currents in the study of science throughout the past half century; and he offers a spirited defense of science against encroaching political and economic forces.

A masterful summation of the principles underlying Bourdieu's oeuvre and a memoir of his own scientific journey, Science of Science and Reflexivity is a capstone to one of the most important and prodigious careers in the field of sociology.
AUTHOR BIOGRAPHY
Pierre Bourdieu (1930-2002) was professor of sociology at the Collège de France. He was the author or coauthor of more than twenty works, including Distinction, Homo Academicus, Pascalian Meditations, On Television, State Nobility, Acts of Resistance, and An Invitation to Reflexive Sociology, the last published by the University of Chicago Press.
TABLE OF CONTENTS


Foreword
Introduction
I. The state of the question
1. An enchanted vision
2. Normal science and scientific revolution
3. The 'strong programme'
4. A well-kept open secret
II. A world apart
1. The 'craft' of the scientist
2. Autonomy and the conditions of entry
3. Scientific capital, its forms and distribution
4. A regulated struggle
5. History and truth
III. Why the social sciences must take themselves as their object
1. Objectivating the subject of objectivation
2. Sketch for a self-analysis
Conclusion
Bibliography
Index