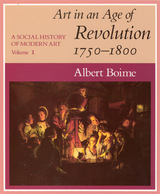 In A Social History of Modern Art, a sweeping multivolume social history of Western art from the French Revolution to World War I, Albert Boime moves beyond the concern with style and form that has traditionally characterized the study of art history and, in the tradition of Arnold Hauser, examines art in a broad historical context. Into his wide-ranging cultural inquiry Boime incorporates not only frequently studied mainstream artists and sculptors but also neglected and lesser known artists and unattributed popular imagery. He examines popular as well as official culture, the family as well as the state, and the conditions of the poor as well as of the affluent that affected cultural practice.

This inaugural volume explores the artistic repercussions of the major political and economic events of the latter half of the eighteenth century: the Seven Years' War, the French Revolution, and the English industrial revolution. Boime examines the prerevolutionary popularity of the rococo style and the emergence of the cult of antiquity that followed the Seven Years' War. He shows how the continual experiments of Jacques-Louis David and others with neoclassical symbols and themes in the latter part of the century actively contributed to the transformation of French and English politics. Boime's analyses reveal the complex relationship of art with a wide range of contemporary attitudes and conditions—technological innovation, social and political tensions, commercial expansion, and the growth of capitalism.