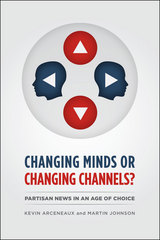 We live in an age of media saturation, where with a few clicks of the remote—or mouse—we can tune in to programming where the facts fit our ideological predispositions. But what are the political consequences of this vast landscape of media choice? Partisan news has been roundly castigated for reinforcing prior beliefs and contributing to the highly polarized political environment we have today, but there is little evidence to support this claim, and much of what we know about the impact of news media come from studies that were conducted at a time when viewers chose from among six channels rather than scores.

Through a series of innovative experiments, Kevin Arceneaux and Martin Johnson show that such criticism is unfounded. Americans who watch cable news are already polarized, and their exposure to partisan programming of their choice has little influence on their political positions. In fact, the opposite is true: viewers become more polarized when forced to watch programming that opposes their beliefs. A much more troubling consequence of the ever-expanding media environment, the authors show, is that it has allowed people to tune out the news: the four top-rated partisan news programs draw a mere three percent of the total number of people watching television.

Overturning much of the conventional wisdom, Changing Minds or Changing Channels? demonstrate that the strong effects of media exposure found in past research are simply not applicable in today’s more saturated media landscape.

AUTHOR BIOGRAPHY
Kevin Arceneaux is associate professor of political science and an affiliate of the Institute for Public Affairs at Temple University. Martin Johnson is professor in the Department of Political Science and directs the Media and Communication Research Lab at the University of California, Riverside.

REVIEWS
“Kevin Arceneaux and Martin Johnson debunk conventional wisdom concerning the divisive effects of cable programming by showing that the availability of consumer choice dampens the effects of exposure to partisan news sources on a variety of beliefs and attitudes. Changing Minds or Changing Channels? will have a significant impact on research in American politics and political communication for years to come.”
— Shanto Iyengar, Stanford University

“Changing Minds or Changing Channels? is among the clearest and most lucidly presented political science texts I have read. It will be of great interest to scholars and  readers outside academia, all of whom will learn something new and valuable from Kevin Arceneaux and Martin Johnson’s compelling argument that the active choices of the audience strongly affect the impact of partisan media.”
— Tim Groeling, University of California, Los Angeles

“Arceneaux and Johnson update the understanding of opinion change through the media for an era of expanded media choice and the growth of extreme partisan content, while jumping headfirst into the debate as to whether the media have a dramatic ‘hypodermic effect’ or minimal effects. . . . Recommended.”
— Choice

“Innovative work. . . . Taken together, [Matthew Levendusky's How Partisan Media Polarize America and Kevin Arceneaux and Martin Johnson's Changing Minds or Changing Channels?] give us a real advance in our understanding of the potentially polarizing effects of partisan cable news.”
— Political Communication

“There has been increasing partisan divergence among the public across a full array of policy issues. This divergence has followed ideological polarization at the elite level since the 1970s, and it is the motivation for Arceneaux and Johnson’s excellent book. . . . The most important and compelling finding is the extent to which it is the attitudes of entertainment seekers that are most influenced by partisan talk show news.”
— Robert Y. Shapiro, Political Science Quarterly

“In an era of partisan television news networks and ideologically-driven hosts, commentators, and analysts, it comes as no surprise that many blame the highly polarized nature of American politics on mainstream media. Yet, in Changing Minds or Changing Channels?, Arceneaux and Johnson challenge this widely held perception. . . . This book presents a fresh perspective that takes into consideration the modern media environment [and] . . . is highly relevant for upper-division undergraduate students, graduate students, and professionals wishing to develop a more nuanced understanding of the complex and ever-changing relationship between media and society.”
— Journal of American Culture

“Understanding the circumstances that limit, and amplify, the effects of partisan news remains an important endeavor. . . . Arceneaux and Johnson illuminate a productive path forward through their innovative experimental designs. . . . Changing Minds or Changing Channels? is a must-read for those interested in experimental design and media effects. The book will inspire scholars to think more critically about media choice and how we study it.”
— Public Opinion Quarterly

Chapter 1. The Expansion of Choice

Chapter 5. Hearing the Other Side and Standing Firm

Chapter 6. The Salience and Framing of Issues

Chapter 8. Media Effects in the Age of Choice