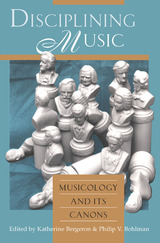 Provocative and timely, Disciplining Music confronts a topic that has sparked considerable debate in recent years: how do musicians and music scholars "discipline" music in their efforts to confer order and meaning on it? This collection of essays addresses this issue by formulating questions about music's canons—rules that measure and order, negotiate cultural constraints, reconstruct the past, and shape the future. Written by scholars representing the fields of historical musicology, ethnomusicology, and music theory, many of the essays tug and push at the very boundaries of these traditional division within the study of music.

"Fortunately, in a blaze of good-humored . . . scholarship, [this] book helps brains unaccustomed to thinking about the future without jeopardizing the past imagine the wonder classical-music life might become if it embraced all people and all musics."—Laurence Vittes, Los Angeles Reader

"These essays will force us to rethink our position on many issues. . . [and] advance musicology into the twenty-first century."—Giulio Ongaro, American Music Teacher