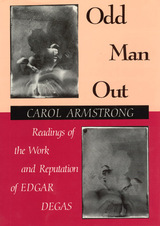 Odd Man Out: Readings of the Work and Reputation of Edgar Degas
by Carol M. Armstrong
University of Chicago Press, 1991
Cloth: 978-0-226-02695-4
In Odd Man Out, Carol Armstrong offers an important study of Edgar Degas's work and reputation. Armstrong grapples with contradictory portrayals of Degas as odd man out within the modernist canon: he was a realist whom realists rejected; he was a storyteller in pictures who did not satisfy novelist-critics; he painted modern life yet was no modernist; he belonged to the impressionist group yet was no impressionist. She confronts these and other contradictions by analyzing the critical vocabularies used to describe Degas's work.

By reading several groups of the artist's images through the lens of a sequence of critical texts, Armstrong shows how our critical and popular expectations of Degas are overturned and subverted. Each of these groups of images is matched to different interpretive moves, each highlighting distinct themes: economics and vocation; narrative and semiotics; gender and corporeality; and the author and self. Armstrong's provocative analysis celebrates the tantalizing qualities of the artist's elusive career: the pluralism of his work, its conflation of positivistic and negational tactics, the modern and the traditional, the abstract and the representational.


"A lucid and searching study. . . . Armstrong has produced one of the most elegant and persuasive examples of the historian's use of 19th-century art criticism. In the process, she has achieved a reading of the artist which makes a difference to the way we understand the difference of Degas himself."—Neil McWilliam, Times Higher Education Supplement

"This is a brilliant, original, and beautifully articulated study. Carol Armstrong's scholarship is impressive in its richness, ambition, and sophistication: Degas's works have rarely been given such detailed, penetrating, and suggestive readings as those offered in this book."—Linda Nochlin, Yale University

"With brilliant insight and incisive analytical intelligence, Carol Armstrong introduces new ways to conceptualize the structural ambiguities of Degas's work. Her subtle and probing readings clarify the fundamental contrariness of Degas's images—their disturbing negativity, their anti-modern modernism. Odd Man Out catapults the criticism of Degas from the hinterlands of traditional art history to the foreground of contemporary critical theory in both literature and the visual arts."—Charles Bernheimer, University of Pennsylvania
TABLE OF CONTENTS


Illustrations
Introduction
1. Degas, the Odd Man Out: The Impressionistic Exhibitions
2. Duranty on Degas: A Theory of Modern Painting
3. Reading the Work of Degas
4. Against the Grain: J.K. Huysmans and the 1886 Series of Nudes
5. The Myth of Degas
Postscript
Notes
Illustration Sources
Index